This Copper Ionizer is a revolutionary combination of UV-C and copper electrolysis in one unit, able to reduce combined chlorine (chloramines) up to 100%!

With the Blue lagoon UV-C Copper Ionizer you have to test your pool water once every two weeks. You only need to test your water values with the supplied test strips and, if necessary, adjust the device to the correct level. Other ionizer systems dose approximately 2 ppm copper in your pool water. With Blue lagoon UV-C Copper Ionizer, a dose of 0,7 ppm will be enough to fully and safely disinfect your pool. This device is able to reduce combined chlorine (chloramines) up to 100%! Max. copper: 0,7 ppm. Connections: Ø63mm. Please notice correct grounding!

Electrically charged copper ions (Cu2+) in the water search for particles of opposite polarity, such as bacteria, viruses and fungi. Positively charged copper ions form electrostatic compounds with negatively charged cell walls of microorganisms. These compounds disturb cell wall permeability and cause nutrient uptake to fail. As a result, bacteria are no longer able to multiply and eventually die. The ions remain active until they are absorbed by a microorganism.

The housing of the Inox is completely made of 316L stainless steel and is the driving disinfection force for (high-end) pools.

The Duplex is especially made for pool professionals and suitable for all types of swimming pools including chlorinated and saltwater (electrolysis) pools.

The Buster UV-C units are made for professional pool use. The are are equipped with interchangeable supports for easy installation horizontally and vertically.

For high volumes and professional applications we offer the VGE Pro UV series. 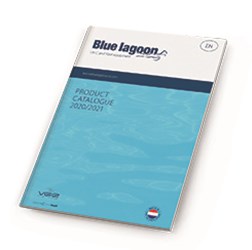 Our Blue lagoon catalog is filled with all of our UV-C pool units to safely disinfect pools. Every unit has it's own qualities and is suitable for different kinds and sizes of pools.